SOME might say it serves them right for moving to the country. 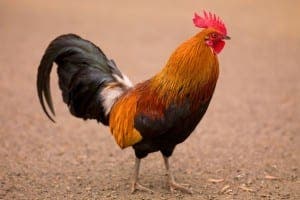 But a British couple in Alhaurin el Grande have been forced to call in police after being kept awake by a neighbour’s cockerel for months on end.

Living in a pen just 30 feet from their home, the pesky rooster often starts crowing at 3am and sometimes doesn’t stop for hours at a time.

Even worse, the couple from London, who work in IT, are often tormented by the raucous rooster during the day.

“We have zero quality of life at the moment and are confined to keeping the doors and windows closed,” revealed the British woman, who asked not to be named for legal reasons.

“We have stressful jobs working remotely for UK companies and are getting little sleep.

“We are now looking to sell up and move back to the UK because we cannot handle this anymore. We are simply at our wits end.”

The couple are particularly upset that their neighbours, a French couple, are apparently ‘blackmailing’ them to move the rooster further away from their house, near Lauro Golf.

“They are asking for €800 to build a new pen for it at the other end of their property. It seems like blackmail to me.”

She continued: “They actually think it’s funny and can’t understand why we have a problem, saying it was ‘our choice’ to live in the countryside.”

Funnily enough it was this view both the local police and town hall took when they attempted to take their complaint further.

Local police were unwilling to intervene and with conflicting information coming from the Guardia Civil, the couple have been left with a bureaucratic nightmare.

The law is fraught and conflicting since owners are responsible for disturbances created by their pets and open countryside is not excluded from a 2003 noise pollution law.

However, the environmental department of Alhaurin Town Hall was less sympathetic. “The countryside is for animals, not people,” an employee told the Olive Press.

Please email newsdesk@theolivepress.es if you have had any similar problems.