I LIKE to think of myself as a liberated, open-minded kind of guy. 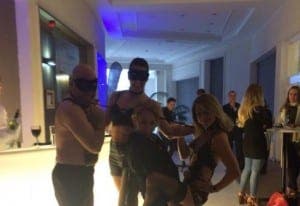 After all, I was born in 1968, almost exactly nine months after the ‘summer of love’ when girls wore flowers in their hair and hippies wore very little underwear. To be fair, this was probably happening more in Haight Ashbury than Stoke-on-Trent…

Spending my adolescent years in Marbella certainly broadened my outlook when it came to the opposite sex, however.

As a 17-year-old on Victor’s Beach in the 80s, where the women went topless or wore bikinis made from little more than dental floss, a day at the beach usually meant a sunburnt back as the combination of raging hormones and semi-naked females meant that I was a little too, ahem, ‘excited’ to turn over…

Regular readers of this column will also remember (probably with a shudder) that I have few problems with getting my kit off on a regular basis.

I stripped naked for a (tasteful) animal charity calendar earlier this year and, most famously, got naked on the summit of Marbella’s emblematic La Concha mountain to celebrate my first ascent.

The resulting photo went viral and many suggest that a statue be erected to mark the event.

After all, Rio has the magnificent Christ the Redeemer, so it’s apt that Marbella should have a naked freelance journalist with a party history more colourful than Gay Pride in Brighton.

I’m also not averse to dressing up in costume, as my appearances as Santa Claus for the Yummy Mummy’s daughter’s school will confirm.

So, when Yummy Mummy mentioned that Max Pilates, where she works out (head for business, body for sin) were having a ‘50 Shades of Pilates’ event and needed a sexy barman, I was more than willing to muck in… “I’m dressing up too. It’ll be fun” she promised.

My next problem was deciding on an outfit. Not wanting to look like the Gimp from Pulp Fiction I decided that bare chested with a mask would be the best bit, and headed to an upmarket lingerie boutique.

Broad minded I may be, but the last time I set foot in anything that sold intimate apparel and the like was with the rugby boys in Amsterdam.

This establishment was somewhat different and extremely tasteful and also very busy.

I took one look at some of the items on display, blushed and decided to come back when they weren’t so busy.

A little later in the day the extremely helpful assistant picked me out a mask and I was ready to go.

I picked up the Yummy Mummy up on the way. Let’s just say that the outfit she was wearing made it somewhat difficult to keep my eyes on the road…

The party was a huge success with a sexy Pilates show drawing cheers from guests.

Even my outfit went down well. Although, a friend who had been at the lake when they shot the calendar quipped, “Jesus Giles. Every time I see you you’ve got your kit off!”

At the end of the evening, I got my sexiest swagger on, sidled up to the Yummy Mummy, and sensuously suggested that, as we were in character she might want to head back to my place for a little spot of “50 Shades of Whey-hey!”

“You have to be kidding!” she replied before heading out with her friends, “50 Shades of Grey with you? More like 50 Shades of No F**king Way!!!!”

There is now a mask, one careful owner, on eBay if anyone is in the market…

John Culatto - 29 Sep, 2022 @ 14:46
GIBRALTAR has been forced to restart the bidding process for the much delayed sewage plant after the company it was dealing with last time...