ARE you fed up with the build up to the UK General Election? 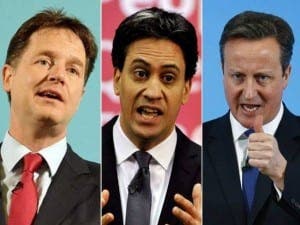 I certainly am – along with most people I meet – yet the vote of May 7 is shaping up to be the most difficult to forecast in recent election history, with the diversity of parties and interests perhaps greater than ever before.

However, if you are already suffering from UK election fatigue, spare a thought for the Americans. Their politicians have just started campaigning for the Presidential election which takes place in November 2016!

As a non-politically motivated person, I don’t hold strong views either way and would not try to persuade anyone how to vote. Lately, however, I am being asked about the impact on investments and markets should party X win or party Y enter a coalition and so on…

My answer is that market values are always trying to estimate where we will be six months or so into the future, so this will typically be factored into today’s market values.

That being the case, you could argue that the market-makers have their biased views and only if something drastically different or unexpected happens will markets react – positively or negatively – depending on the variance.

Facing so much uncertainty the market-makers are probably taking a pragmatic view which recognises that most politically charged changes are often watered down by the time the party concerned has formed a Government, and, if we see a minority Government or a coalition, the potential for drastic change becomes even more difficult to enforce.

With that in mind, do we see the end of the financial recovery if a certain result is achieved? I don’t think so!

Regarding the underlying factors affecting the UK and US economies, will these stagger to a halt if there is a change in emphasis between austerity and spending? And what if there is a referendum on the UK leaving the EU and that gets the ‘out’ vote, businesses stop trading with each other overnight? On both counts, again, I don’t think so.

Unfortunately, it is the political ‘hot air and bluster’ as I call it, which takes over. If we are not careful, we will start to believe the doom and gloom predictions, which should be ignored in favour of looking behind those vote-winning antics to what the future may really have in store.

Once the election dust settles, economic recovery will continue and the world stage will continue to evolve as the fiscal cycles ebb and flow as they have done for a decades.

I believe that individual financial focus should assume interest rates will remain low for a long time yet, regardless of the election result and that you should be planning accordingly.