A PAIR of expats have blown a fuse after one of Spain’s biggest electrical chains refused to refund or replace faulty items. 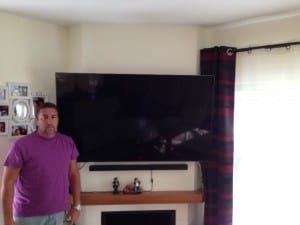 Both men slammed the ‘non-existent’ customer services at Worten’s Marbella and Fuengirola stores after the ‘useless’ appliances arrived broken or quickly breaking down.

Mike Hodge, 49, of Benahavis, was left dumbfounded when his €1,200 fridge arrived with a broken door.

“When I was told I’d have to pay to fix a fridge I have not even used I almost exploded then and there in the shop,” he said.

“We have spent thousands with Worten and yet we have been made to feel like criminals – it has been very upsetting.”

Meanwhile, Marbella-based Jeff Lewis, 43, bought a 65” Samsung television for €2,200 to find the sound did not work within a month.

“I have been batted between Samsung and Worten, neither of whom will take responsibility..

“The staff were extremely rude in the store – they shouted and even swore at me – and now they seem to run away whenever I come in to raise it with them.”

Both have now filed official complaints with the Portuguese company and have been joined by numerous other unhappy customers on Facebook group Expats Warning & Information.

Two years ago, the Olive Press reported how expat John Benchley was so furious at Worten’s customer service he smashed his new printer on the ground in the shop.

He said: “I am not proud of the fact that I lost my temper but at least it provided some amusement to the other customers.”