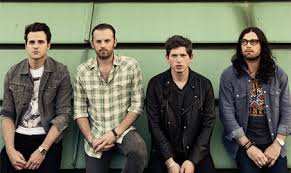 CHIEF Minister Fabian Picardo will be feeling on fire, after the Rock bagged Kings of Leon to headline its music festival.

It comes after Picardo revealed to the Olive Press that he was a huge fan of the American Rock band, in an interview in 2012.

And as luck would have it, the ‘Sex on fire’ boys have been confirmed as this year’s headline act at the Gibraltar Music Festival.

The lineup also will also offer a blast from the past, with 80s British legends Duran Duran gracing the stage.

Pianist Tom Odell, breakthrough singer-songwriter Rae Morris and noughties power-pop superstars The Feeling are among the line up.

Tickets on sale from May 15 at www.gibraltarmusicfestival.com for the festival on September 5 & 6.