A DEADLY bacteria has been found in an Estepona river.

A strand of the killer E-Coli bacteria has been detected in the Arroyo del Hornacinos, a stream often played in by children.

Residents of the neighbouring Villas Andaluzas are now calling in the Guardia Civil’s environmental arm Seprona, after written complaints to the town hall came to nothing.

They insist that the area is overrun with rats and mosquitos and the town hall has been completely ‘inactive’ despite receiving the first report in April.

Independent analysis of the water shows that the river poses a serious health risk and could be fatal.

A report from Laboratorio Rafael Perez Rodriguez stated that the quantities of ‘coliforms’ were so high that there were ‘too many’ to count.

E-Coli can cause vomiting, diarrhoea, liver disease and worse.

“It is an absolute disgrace and worse, a serious health hazard,” said British resident Sam Hall, 78.

He added: “It’s especially worrying because we have seen children playing near the water where it flows into the sea.

“If anyone were to be struck down, it would be a national scandal.”

Hall and his wife Susanna, from Surrey, as well as various neighbours, have submitted a number of formal complaints to the town hall.

In response, a town hall spokesman told the couple Mayor Jose Urbano was ‘aware of the problem’ and it would be ‘sorted out’.

However, when a clean up was finally ‘promised’ for May 18, nothing happened.

“They say one thing to keep you happy and then do nothing about it,” Hall added.

“On hot days the smell is so unbearable that we are unable to sit out in our garden.” 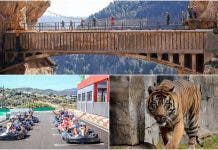