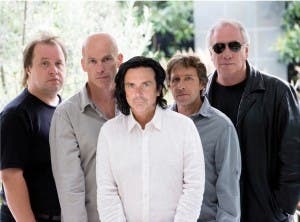 Steve Hogarth has been the frontman of veteran British rock band Marillion for more than 25 years. He talks exclusively to The Olive Press ahead of his ‘special h (super)Natural’ show in Gibraltar.

What brings you back to Gibraltar time and time again?

I have friends in Gib so there’s a slight social element to it. The main reason I’m here this time is that I had such a good experience in The King’s Chapel last year as part of the Gibraltar International Literary Festival. It was only a small show, in comparison to the upcoming one, but it was a rare one where everything just flowed. I was so happy with it that I asked my friend Fabian (Vinet, former Gibraltar Government minister and personal friend) if there was any chance of coming back for another one. He found me promoter Jordan Lopez of GibMedia and I think it has been set up really well. Cheers gentlemen!

Will you perform solo or with a band?

I normally do these h Natural gigs alone but we wanted to make this one different – a bit special. At some point in the show I will invite my pal Dave Gregory to join me on stage. Dave’s a great player and apart from being the guitarist in 80’s influential/innovative band XTC – I’m a big fan. He has also collaborated with me on numerous occasions, as the core member of the h Band (we made the Ice Cream Genius album and toured Europe together) and co-collaborator on my recent work with Richard Barbieri (of Japan, Porcupine Tree). In addition to Dave, my other pal – and son – Nial Hogarth will be adding percussion to the show.

Focusing on your son Nial the drummer, is this the first time you will perform together?

I have only performed in public once with Nial. This was at the Waterside Theatre, Aylesbury last year. We played a couple of songs as part of a charity event. He’s a good player and, like Dave, a top human being. I’m very proud of him. To play together with Nial will make the evening doubly special for me.

What do you expect from a concert in a venue such as Saint Michael’s Cave? What will make it ‘supernatural’?

Ha ha. (Super) natural. I think Fabian came up with that title. I have played St Michael’s Cave once before. It is a beautiful space to play. Truly ‘underground!’ The whole point is to create something fragile, volatile, intimate and totally ‘in the moment’. I’ll be digging around in myself for the spiritual and the supernatural alright. You can be sure of that.

What genre of music will you guys play? Marillion hits, new material, acoustic…

The ethos of h Natural has, and will remain acoustic. I’ll have a concert-grand piano, Dave will play acoustic guitar and Nial will play cajon, although I will begin the show alone. These shows are deliberately organic and I like to have a dialogue with the audience. I’ll give the audience the freedom to steer the show’s direction – so if it goes wrong, it’s not my fault, it’s yours! The choice of songs will only really become apparent afterwards although I will include whatever has been particularly meaningful to me across the course of my life. In Marillion’s shows I am in control of what I’m doing, every musical detail is rehearsed and I have a wall of sound to hide in. This show will be the opposite of that. An expose – the good, the bad and the ugly… Hopefully, and all being well, the exquisite too.

About your biography: why is it titled The Invisible Man? It’s a curious nickname for a frontman.

‘The Invisible Man’ is the opening song on Marillion’s ‘Marbles’ album – arguably the best song we ever wrote. I chose it as the title for the diary because it exposes the side of me that the fans can’t normally see. Fixing the dishwasher, playing with my children, sleeping on buses, being hauled off trains at gunpoint, meeting astronauts…

Are you still keeping a diary?

Not every day. Just now and again. It was always like that.

How is your experience as a musician going to be a role model to young readers?

Ha! Well it might work the other way… They might read it and think ‘Where’s the sex and drugs?!’. I haven’t lived the life of a saint, but I never felt the need to write down which laws I have broken or who I have slept with. If the kids want me as a role model, well I’m a good choice – I’m all about love and understanding.

Any advice to youngsters starting a band?

First of all, decide whether you’re doing it for fun or whether you’re serious. If you’re serious it can still be fun, but you’re going to have to be focussed and you’re going to have to work hard – not just on the music, but you’re going to have to pick up the phone, the email, and put yourself about. If you’re too shy to do that, then make sure there’s someone in your band who isn’t! I won’t give you advice about the music because that’s all down to you. What people recognise as brilliant isn’t always obvious to everyone and definitely not always obvious to old men like me. But make sure that when you walk onto a stage you recognise that being there isn’t your right, or a bit of fun, it’s a huge privilege – and you’d better justify that by doing something important. And make sure you collect the email addresses of everyone who hears you play and enjoys what you do, because if you know who your fans are, then you have the power. (That last point is important, so don’t ignore it.)

Will you return for the 2015 Literary Festival with Volume 3?

Well if I do, it won’t be a book, it will be a pamphlet – I haven’t written much this year. Now, if I’m invited to come and hang-out or play a few songs, that’s a different matter!

When you were a kid, what did you want to do when you grew up? What was ‘plan B’ if your artistic career didn’t take off?

Fighter pilot. Formula 1 racing driver. Then I heard the Beatles and that was it. Plan B was a degree in Electrical Engineering followed by working as a design engineer for a while. I did the 9-to-5 but my heart wasn’t in it.

What did your school friends say when you told them ‘when I grow up I want to be a rock star’? And what do they say now?

My friends wanted to be rock stars too, so there wasn’t much to mock. But there was much to discuss! What do they say now? Well I think I only have one friend left from back then. He’s called Dave and he says hi. Most of us drifted apart, like you do. I lost one to cancer, one committed suicide. One tried to murder me! We didn’t speak much after that…

What is your impression of the Gibraltar music scene? And how do you find the UK one?

I’m afraid I know nothing about the Gib music scene. I think Britain still occasionally throws up incredible bands – Radiohead, Elbow, Massive Attack. Can’t think of anything utterly outstanding recently but then I have been busy.

Anyone opening for you at the Cave?

Yes. Megan Dallas, a young talent who I’ve been assured is well liked on the Rock.

What do you do when you are not singing?

Email! Worrying. Doing the school-run. Hanging out with the rich and famous. Sleeping with supermodels. Not all of that was true…

An anecdote about a proud moment and one about an embarrassing moment?

I was driving Neil Armstrong at great speed round the M25 motorway and I asked him if it was okay for him that I drive so fast. After a pause he said “That’s fine.”

I was as proud as I was embarrassed.

Why shouldn’t – and won’t – we ever stop the music?

The best answer to this is stolen from something I heard Neil Tennant say. “If you could imagine a time when there was only one person left on earth – sitting in a cave somewhere – he or she would probably be humming a tune.”

h (Super)Natural – A Special Evening with Steve Hogarth & Friends takes place this Saturday 30th May in St Michael’s Cave, Gibraltar. Tickets, priced £20, include a shuttle service from Grand Parade and are available from www.buytickets.gi