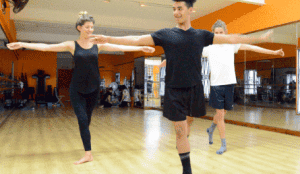 PIROUETTE, followed by a quick gallop before rounding off with a split jump. It only took 40 minutes for me to be transformed into the Olive Press’ very own Lord of the Dance… fortunately leotards were not required.

On my way to meet Gibraltar’s 15-year-old superstar Jonathan Lutwyche, it suddenly dawned on me what I had got myself into.

The dancing supremo has two-stepped his way to the semifinals of the biggest talent show in Europe – Britain’s Got Talent.

His breath-taking audition at the Royal Albert Hall left the entire crowd on their feet, along with Simon Cowell, the rest of the judges and the millions watching on TV. 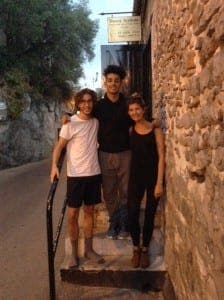 I, however, had yet to grace a dancefloor without being suitably lubricated (usually with cheap cider) beforehand.

But my nerves evaporated at the flick of a heel as you can’t help but be won over by the young Gibraltarian’s enthusiasm and infectious laugh.

As his teacher at Danza Academy, Anne Marie Gomez, explains: “People just love Jonathan, he has a presence about him that touches everyone.

“Big, rugged men in the street will stop him and tell him how much they enjoy his dancing.

“I have never worked with someone who captures the audience in the way Jonathan does.”

She adds: “I even learn things from Jonathan and I have 23 years dancing experience.

“I would term him as a genius.” 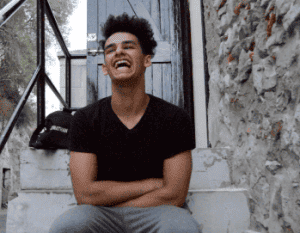 And despite the high praise, and newfound stardom, it is clear the teenager has remained well grounded.

He describes his family, including three older sisters, as his biggest supporters and claims he wouldn’t have the confidence to dance without them.

“I would like to think I’ve done myself and my country proud,” he says.

“It is a difficult thing as a young boy to say you want to dance, some people think it’s not cool, but I think the way I dance is winning the boys around, and the fact I do flips adds a bit of coolness to it.”

Jonathan will be bidding for his place in the competition’s final later this week. What the future holds is still in the balance, if he’s a hit on the show he will tour with it, if not he has a place lined up at the Joffrey Ballet School in New York to fall back on – not a bad consolation prize.

As for my future dancing career, I think I better stick to the day job.

To watch exclusive footage of Jonathan dancing and talking to the Olive Press, click here.