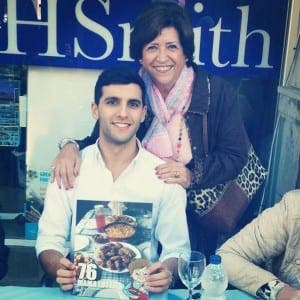 TO celebrate the al fresco dining season, the Olive Press is serving up a series of  tasters from an award-winning new cookbook that lifts the lid on Gibraltar’s secret gastronomy. First, Iona Napier meets the author…

Gibraltar is never as vibrant as it is in springtime, when the days grow longer, the sun shines brighter, and the pace of life begins to slow down.

Long days, cool evenings and the smell of fresh seafood circulates and entices the locals out of hibernation.

It is a far cry from hectic London’s rain and sleet, not to mention Middlesex University, where Gibraltarian food extraordinaire Justin Bautista, 25, studied Graphic Design.

Bautista says: “London was big and scary at first compared to Gibraltar, it was very different but so exciting.”

When homesick, Bautista would recreate dishes from home and launched a Gibraltarian recipe sharing website named after his grandmother ‘Mama Lotties’ which now has several thousand devoted followers.

It also inspired his next project, a cookbook dedicated to his grandma’s foodie flair: 76 Mama Lotties Gibraltarian Inspired Recipes.

Now it has been nominated for the most prestigious award in cookery writing, the Gourmand World Cook Award 2015.

“The fact that recipes have been passed down through many generations and never written down has made a sharing site really interesting,” he says.

“And nothing is grown in Gibraltar, so the food scene has always depended on what can be imported: the closure of the frontier affected food a lot.”

Gibraltar’s location as the gateway to the Mediterranean, and its melting pot of cultures, means ideas have always been shared and the diet is varied and exciting, Justin explains.

“There are lots of British aspects – naturally – but the mix is amazing, from Spanish, North African and Portuguese touches to Maltese influences,” he says.

At this time of year, he yearns for what he describes as ‘the quintessential Gibraltarian springtime meal’ which you can make yourself, following his recipe, in the first of our new series.

It would start with torta acelga (a pie made with spinach or chard) along with fresh garlic clams –  seafood is a speciality in Gib.

There’d be  meatballs in tomato sauce to follow, and something sweet to finish, such as bite-sized volcano cakes – one of many forgotten Gibraltarian culinary traditions Justin is sharing with the world through his cookbook.

He also reveals that traditional British afternoon tea is a very important occasion in Gibraltar.

“The beach is the place to be in Gibraltar in summer but everything gives way to British tea time!” he says.

“Come four or five in the afternoon, you will see everyone under their umbrellas enjoying a hot cup of tea and home-made cakes.”

Justin also surprises with his top al fresco recipe tip – one you can cook in the sunshine on the beach!

“If you have a terracotta bowl and lid, you can cook fresh prawns pil-pil or clams outside in summer,” he says.

Serve with ice cold sangria to produce smiles all round!

Recipes can be found in the Olive Press issue 213 or buy the book here!