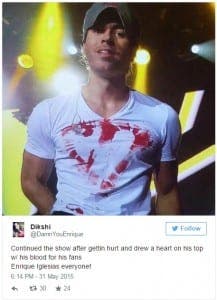 ENRIQUE Iglesias was something of a hero when he refused to let a bleeding hand get in the way of a live performance in Mexico.

The show went on for the Spanish star after he sliced his hand open by grabbing hold of a drone in Tijuana in front of 12,000 fans last weekend.

Assistants advised Iglesias, 40, to stop the show but he performed for half an hour longer with a bandaged hand and a T-shirt that was covered in blood stains by the time he finally bowed out.

The heartthrob was met by an ambulance after being rushed to the airport and met a specialist in LA to examine his injury.

The Plaza de Toros de Playas concert venue was packed with revellers for his Sex and Love World Tour, many of whom praised the ‘professionalism’ of the singer for continuing his act.

He was just 50 minutes into the performance, singing ‘Escape’ when he seized the drone to give the audience a view of themselves, but the blades caught his hand causing the injury.

The next stop on the tour is Mexico City, provided he makes a full recovery.