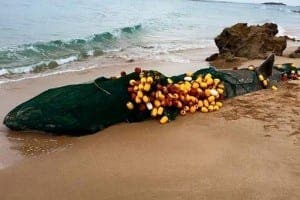 A SHARK tangled up in fishing debris has been washed up on the beaches of Cadiz to the horror of bathers.

The huge creature, reported to be a basking shark, was found dead on the beach and photographed by Cristina Leinenweber Perez in May.

Hawaiian campaigner Ocean Defender shared the photo on twitter which sparked outrage on the internet.

One commentator wrote: ” It’s negligent homicide… Such a disgraceful, disregard for life other than humans, some of these fishermen… No excuse for this irresponsibility…”

To watch a video of the blue shark spotted basking in the shallows in Fuengirola last week, click here.