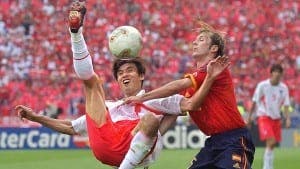 SPAIN’S shock defeat to South Korea in the 2002 World Cup is under scrutiny amid FIFA’s corruption probe.

Led by complaints in the Italian press, South Korea’s progress to the 2002 semi-final has been called into question.

The Corriere dello Sport newspaper alleges that the referee who presided over Spain’s penalty shoot-out defeat to South Korea was put in charge of the game by bent FIFA delegate Jack Warner.

Spain had two legitimate goals ruled out by Egyptian referee Gamal Al-Ghandour during normal time, before La Roja crashed out 5-3 on penalties.

The newspaper also claims the Koreans victory over Italy in the previous round was in some way fixed.

Ecuadorian referee Byron Moreno, who sent off Francesco Totti during the game, has since served a 26-month sentence for drug trafficking in New York.