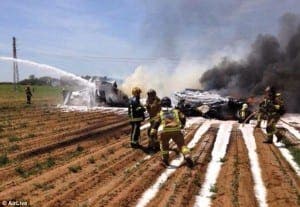 ANALYSIS of the black boxes on board the military plane which crashed in Sevilla has revealed that three of the plane’s four engines failed.

Four people lost their life when the A400M aircraft crashed on May 9, just 15 minutes after taking off from San Pablo airport.

Two other crew members were taken to hospital with ‘serious’ injuries.

Investigators confirmed that engines one, two and three experienced ‘power frozen’ after lift on and did not respond to attempts to manually take-over.