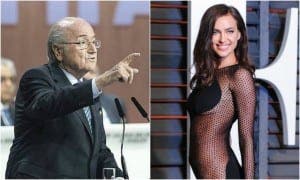 Spanish daily El Mundo has made the sensational claim about the disgraced FIFA president in the wake of the biggest sporting scandal of all time.

The article titled ‘All the women in Blatter’s life’ claimed the 79-year-old had a sexual relationship with the Russian model after he split with tennis player Ilona Boguska.

While Blatter has so far failed to comment, a source close to the model was quoted as saying ‘It is absolutely untrue’.