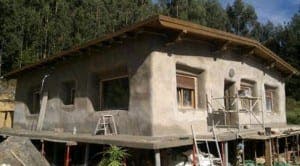 IT didn’t work out for the first of the three little pigs, but Spaniards are constructing a straw house that will not blow down at the first puff from an angry wolf.

And it will consume 90% less energy than the average house, too.

The creation in Biscay from Basque company EcoPaja is the first house of its kind to be built in Spain to premium industrial standards.

The construction has a solid wooden structure and compressed straw serves as the insulation of the house, which is also fireproof.

Compared to an average house with 20cm thick walls, the straw house’s walls are half a metre deep and, coated in lime plaster to allow the house to breathe, offer prime insulation.

The building is part of a new wave of ‘healthy builds’ made of only natural, locally sourced, non-toxic substances.

And taking under four weeks to construct in the factory and three days to assemble on site, the economical choice (€1,000 per square metre) could take Spain by storm.

These are officially the 10 best tortillas served in Spain