MORE than a 100 Marbella-bound tourists have been left in the lurch after holiday company Rainbow Villas suddenly ‘ceased trading’.

One group of 20, from Manchester, had booked Villa Blue through website Owners Direct for friend Victoria Edwards’ hen do.

They paid €4,400 and are due to fly out to Spain on Friday morning, but received a shocking email from Rainbow Villas on Sunday to say it has ceased trading – and that the villa is not available.

They are now desperately searching for 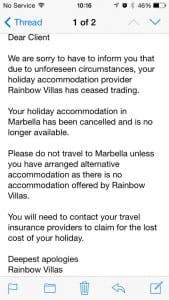 alternative accommodation, and have not yet received a refund.

While it appears several other groups were also booked into Rainbow Villas’ properties and, in more than one instance, over the same June weekends.

A Facebook group for victims of Rainbow Villas collapse now has almost 250 members.

One member, Gemma Axell, was five minutes from Gatwick airport last week when she saw an email telling her the villa had been cancelled and not to travel to Marbella.

“Devastated was an understatement, I took the costume off and sobbed as the reality sunk in that we had nowhere to stay and had lost £4350 (€6,000) on a villa,” she posted in the group.

Rainbow Villas, owned by Mark and Michelle Stafford, sent the same email to their clients, instructing them to contact their travel insurance to claim for the lost money.

If you have any information on Rainbow Villas, please contact newsdesk@theolivepress.es or call 0034 951 273 575

EXPOSED: Man accused of stealing €80,000 of holiday items from bride and 12 British hens in Mijas is a...