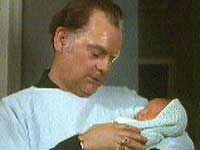 I’LL never forget that line in Only Fools and Horses when Del Boy becomes a proud father and his brother Rodney asks him, “What is it Del?”

When will parents realise that ‘having a baby’ is a euphemism. What they are actually going to have is a baldy little human being (kittens are sooo much cuter) that morphs, progressively, into a terrible two-year-old, cheeky child and truculent teen.

By the time it reaches adulthood, gets a modicum of sense and is in a position to repay its parents for the long, thankless years of love and money showered upon it, it ups and leaves, returning fleetingly for Christmases, birthdays or, if extremely cash-strapped (or Spanish), to resume residence, often with partner in tow.

(Did you know that humans are the only species on earth that allow their offspring to return to the nest?)

Later, when said offspring have kids of their own, and Mum and Dad are unflatteringly re-named ‘granny’ or ‘gramps’, they will be expected to participate in nurturing a second generation of babies through their costly rites of passage.

Then, when they can be of no further use, they will be summarily despatched to the old folk’s home until they fall off the perch, an event the kids hope will happen sooner, rather than later, before the inheritance is all used up.

Of course, it doesn’t always turn out like that. Some of my best friends are contented grandparents. But given that the Eurozone now has the world’s lowest birth rate, at 9.9 children per 1,000 population, there must be an awful lot of people out there who think like me.

They say other people’s kids are the most effective form of birth control; and, having listened to the ear-piercing shrieks of a great many little Darrens and Tracies in my time (British kids are among the worst), I find that so true.

I’ve seen harassed parents bribing their kids with ice cream and threatening to give their Gameboy away to the poor, all to no avail; I’ve seen them apologising to restaurant managers for cola spilled, chocolate smeared and Kinder Egg machines put out of action; I’ve watched them pacing the hotel lobby at 2am, worried about what drug- or alcohol-fuelled condition their teenagers might return in … if they return…

That said, the average woman’s urge (but not mine) to produce her own tiny creation and dress it up in cute booties is still strong. And when the brooding instinct hits, all thoughts of the juvenile delinquent it may grow up to become are lost in a fantasy of cherubic bottoms and Baby Gap romper suits.

In my village of Los Barrios, every female of child-bearing age who isn’t pregnant is pushing a pram, reprimanding a screaming toddler or trailing a disaffected adolescent in her wake.

In my humble opinion they should give up breeding and get a cat. You don’t have to wash and iron for them; they don’t require therapy later in life because of your sub-parenting skills; and you’ll never get stretch marks!