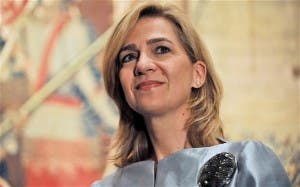 KING Felipe VI has stripped his sister of her royal title since she is facing trial.

Infanta Cristina no longer has the right to be called the Duchess of Palma.

The charges upheld against the King’s sister relate to business dealings by her husband, former Olympian Inaki Urdangarin.

Judges are investigating allegations that he embezzled millions in public funds with a former business partner – and that the princess knowingly benefitted from the dealings.

The Infanta is the first of the Spanish royal family to be tried in open court and, if found guilty, could serve six years in prison.

The 49-year-old will be tried alongside her husband, and they both deny everything.

Cristina is sixth-in-line to the throne but media attention to royal scandal is piling on the pressure for her to give up her succession right to the throne.

From journalist to Queen of Spain: Letizia celebrates her 50th birthday