ALMERIA will be gangster trippin’ this summer to the sound of Fatboy Slim, now that the legendary dj has been announced on the bill for August’s Dreambeach festival. 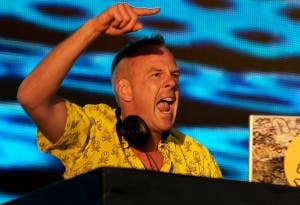 The dj, real name Norman Cook, is the latest star along with Eric Prydz to join the already glittering line-up.

The highlight of last year’s festival, Dutch dj Van Buuren will also return to Villaricos’ beaches for the event on August 7-8.

Specialising in trance music, he is currently third in DJ Magazine’s 2014 rankings, but has been first a record five times.

Meanwhile German Kalkbrenner, one of the most celebrated techno dj’s in the world, also joins British duo Sigma Live, Headhunterz, Andy C and Noisia on the line-up.

Dreambeach Villaricos was one of the finalists for best festival in the Vicious Music Awards 2014, due to its stunning location and internationally acclaimed acts.

€15,000 fine for venue and DJ who spat alcohol over revellers in Spain’s Torremolinos last summer