LIONEL Messi’s girlfriend Antonella Roccuzzo has been rushed to hospital.

Only days after receiving a vicious kick to the ribs by the Chilean defender Gary Medel, FC Barcelona football superstar Lionel Messi was at his girlfriend Antonella Roccuzzo’s hospital bedside.

Roccuzzo, five months pregnant with the couple’s second child, was hospitalized early on Tuesday at the Hospital Español de Rosario, in Argentina, with a urinary infection.

Despite Messi’s opening goal, Argentina lost on penalties, leaving Messi still without a major title with the Argentinian team.

During the final match, Messi’s parents and two brothers were harassed in the stands, with Chilean fans yelling insults and hurling objects.

According to the Telam news agency, the infection will not affect her pregnancy. She is on a course of antibiotics, and according to the hospital is responding well to the treatment. 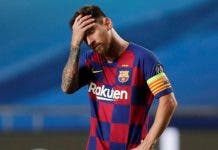 DON’T BELIEVE THE HYPE: Whatsapp message warning of imminent lockdown in the Valencia region is a hoax