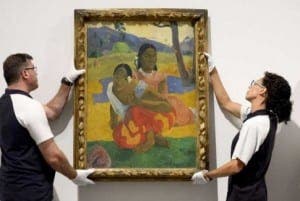 AT the mind-boggling price of €270 million, it is reportedly the most expensive painting ever sold.

So it is fitting that Paul Gauguin masterpiece ‘Nafea faa ipoipo’ (‘When are you getting married’) should arrive in one of art capital Madrid’s top galleries.

The 1892 oil painting of two Tahitian girls has gone on display in Madrid’s Reina Sofia art gallery after being sold to an unnamed Qatari buyer earlier this year.

The Tahitian painting is on loan as part of a special 60-piece exhibition running until September, having previously hung in Basel, Switzerland.

The Rudolf Staechelin Family Trust handled the historic sale, but played down its importance.

“This is not the most valuable painting in this museum. I think Guernica is definitely worth more than this painting,” said trust spokesman and art collector, Ruedi Staechelin.

“It is not the amount of dollars hanging there, there are wonderful paintings there.”

The masterpiece replaces ‘The Card Players’ by Paul Cezanne which was previously the most expensive painting to be sold, reportedly changing hands for €227 million.

It is a big week for the Spanish art world, with the first major exhibition in 25 years on iconic Spanish artist Francisco Zurbaran showing at the Thyssen-Bornemisza in Madrid.