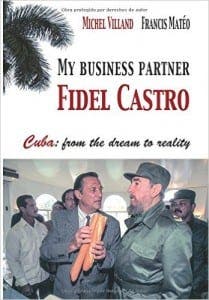 AN expat author in Granada has published a book about the trials and tribulations of doing business in Cuba – where his partner was none other than Fidel Castro.

The world-famous communist dictator even attended as guest of honour when Michel Villand opened his Pain de Paris bakery chain, after arriving in Havana in 1994 with US$3 million of investment capital.

Eroticism, power politics, economics, black magic and revolution all come into play in My Partner Fidel Castro, 74-year-old Villand’s intriguing account of his adventures in business with the nation’s cigar-chomping military leader on the stunning Caribbean island.

The book is set during Cuba’s economic crisis when the government was promoting initiatives to attract foreign investment, although no foreigner could be a main shareholder.

The likes of Francois Mitterrand and author Gabriel Garcia Marquez also make appearances in this autopsy of life within Castro’s world.

French-born Villand, who lives in Montefrio with his Cuban wife, hopes the book will help other prospective businessmen caught up in the frenzy to invest in the new Cuba.

“What we accomplished in 1994 with the three million dollars would be difficult to replicate today, but not impossible,” he says. “A great deal of patience and tenacity is required to prove you are the best, and my book shows just how to go about that.”

The book is available on Amazon and in bookshops in English, Spanish and French.

HISTORY REPEATS? How the Brexit debacle reminds Charles Gomez of the Spanish American war more than 100 years ago