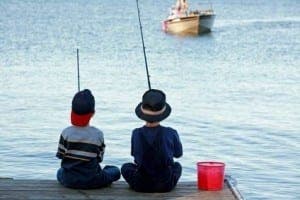 CHILDREN fishing with small rods are allegedly being threatened with fines.

The Rock’s budding fisherman have been slapped on the wrists by environment officials for fishing in the port area, according to a Gibraltar Social Democrat spokesman.

The opposition party spokesman claims a number of youngsters have been threatened with fines for casting their lines without a licence.

In response, a government spokesman slammed the allegations as ‘really desperate’ and added that there was ‘no evidence’ to support the claims.

George Mathias - 26 May, 2022 @ 11:15
A Gibraltarian HM Customs vessel has been badly damaged by an arsonist. A small inflatable boat approached the HMC Seeker where an unknown person fired...