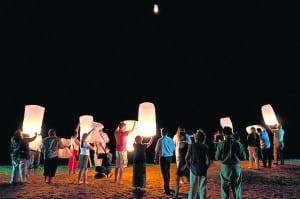 ANGRY expats are picking up the pieces after over 50 Chinese lanterns landed in the Manilva countryside following a Sabinillas Full Moon Party.

Despite Manilva town hall’s attempts to ban the candle-lit lanterns, which are a massive fire risk, numerous revellers flouted regulations by releasing them.

USA expat Ronald Rosenfeld, who lives near Duquesa, said: “They are so dangerous and can cause huge damage in an area already prone to fires.

“The council banned them but too little was being done to stop people releasing them.”
Manilva councillor Dean Tyler Shelton, however, insisted 90% less lanterns got released this year than last year.

“And next year it should only be a handful – and hopefully zero,” he added.