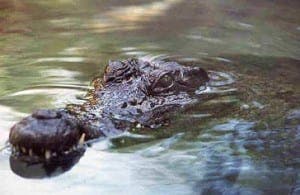 SPANISH police are investigating an emergency call that alerted them to a crocodile in the river Guadalquivir.

The crocodile was spotted in an area which, although it is forbidden, is a favourite bathing spot for groups of young people.

After Cordoba residents raised the alarm to the authorities at 12.42 yesterday, police have been patrolling the area on the lookout for the waterborne predator.

The exact location of the sighting was the settlement of Majaneque, 12km west of the popular tourist town of Cordoba.

“It isn’t unlikely,” said a spokesperson for local police, who confirmed the phone calls from the Cordoba resident.

And the croc-spotter was not the only one to spot the reptile in the Guadalquivir – numerous locals claimed they had seen it but not called the police.

A large network of police are patrolling the waters and have called for better equipment if the reports of a crocodile are  true.

The Guadalquivir, the second longest river in Spain, passes through Cordobo, Sevilla, and ends in Sanlucar de Barrameda.

Is Cordoba home to the oldest Arab baths in Spain?

Blessed be… our pets: The fiesta in Spain’s Valenica where animals go to church