By Caitlin Quinn and Nina Chausow

THERE are lies, damned lies and then there are the latest statistics which claim an enormous north-south/ west divide between Spain’s richest and poorest towns.

In fact, according to Spain’s National Statistics Institute (INE) there’s a per capita income gap deeper than Ronda’s El Tajo gorge between the trendy Madrid barrio of Pozuelo de Alarcon and the popular Costa Blanca tourist town of Torrevieja.

Pozuelo’s populace is sitting pretty on an average salary of €54,000, while the townsfolk of Torrevieja struggle to get by on a paltry €7,985 a year.

The dole queue sits at just 12% in Pozuelo while in Torrevieja, where employees earn over eight times less, a staggering 31.5% are whistling for work.

Pour yourself a nice cool drink, sit back and join us as we take you on a virtual tour to see whether this curious tale of two cities is all a bit rich.

In search of Pozuelo’s riches

FIRST impressions clearly don’t count, I thought, as I hurried out of the train station, almost tripping over a homeless woman sleeping rough in the doorway, a dirty scarf tied around her head.

I’d only gone one block before I passed a derelict bank daubed in graffiti, and a street beggar sitting down in front of it holding out an empty cup.

Poverty is far from uncommon in any city but this was posh Pozuelo de Alarcon, the Madrid barrio that has been named the richest area in all of Spain. The very last place I expected to encounter blatant homelessness from the outset.

A 15-minute train journey from the bustling city centre, Pozuelo was once a small pueblo sprouting vineyards and farmland, famous for its leather workshops.

After an urban boom in the 1970s, the only proof that remains of the original town is the Camino de las Huertas, a road named for the orchards that once bloomed with ripe fruit, which now traces a route lined with vast concrete urbanizations.

Normal, nice even in parts, but not exactly a playground for the fabulously super-rich and certainly several kilometres short of Marbella’s famous Golden Mile.

What I saw just beyond the station seemed to be a quiet dormitory
suburb built for Madrid’s commuting upper-middle class that had seen better
days, with its boarded-up windows and hole-in-the-wall shops.

I stopped in a little bakery to find out what was going on.

A kind, bun-faced woman called Ana gave a little start followed by a hearty guffaw when I informed her of Pozuelo’s numero uno status.

“If that’s true, I don’t feel the wealth at all,” she laughed. “If you want to see wealthy, go to La Moraleja [an affluent Madrid barrio].

“Almost everyone who lives here travels into Madrid for work.”

Armed with a €1 cream-filled napolitana for my fact-finding tour, I plunged straight into what appeared to be most typical of the surrounding residential neighbourhoods.
House after identical house lined the silent streets.

Flash motors and boy racers were conspicuous by their absence with nothing more exciting than a Toyota parked out front.

The houses, faced in black and white brick, looked new and well-kept but lacked any signof overt luxury, let alone inhabitants. Although no one in their right mind would walk through this hilly district at lunchtime in summer when the sun is at its most searingly hot.

In a desperate search for shade, I stumbled upon one of Pozuelo’s primary attractions, a series of massive parks.

Wandering along a pathway under a canopy of arching birch trees, I emerged at the entrance to the Hotel Pozuelo, a quiet red brick building topped by a Spanish flag fluttering in the welcome breeze.

The concierge looked anxious as I approached (my shoes were a bit casual for a four-star hotel with a marble lobby) but she relaxed when I enquired about tourism in Pozuelo, a question which seemed to strike her as ridiculous.

“There is really no tourism in this area, almost all of our visitors are travelling for business,” she said bluntly, mentioning Microsoft, Santander and Orange among the business hubs in the area.

And then the penny dropped… they’re the ones paying the fat salaries.

So is there anywhere more interesting to go that would convince me that Pozuelo is really the Monaco of Spain in disguise?

She shrugged, then suggested: ‘Back to Madrid?’ 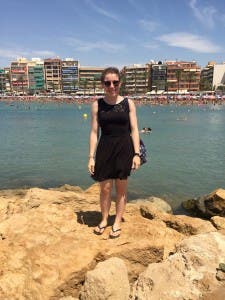 Down and out in Torrevieja

‘WHY?’ That was the reaction I got when I told friends and colleagues I was off to Torrevieja.

No one had anything positive to say about the beach resort that recently made headlines for having the lowest per-capita income in Spain.

So when I landed at Torrevieja bus station, my expectations were low, anticipating streets paved with scrawny stray dogs and down-at-heel folk.

To my great surprise, it looked like a perfectly normal middle-class holiday resort boasting the usual suspects – restaurant-lined pavements and a beach-fringed paseo.

However, dig below the surface and it’s a different story.

“Of course it’s busy now, in July,” explained shopkeeper Alejandro Gracia. “But in the winter, this street is totally deserted.”

Nearly every person I interviewed told me the same thing: Torrevieja’s economy is chiefly seasonal, alive and kicking during the summer but as deserted as a row of beach beds in
December after the tourism season ends.

“There are no jobs here between September and May,” said Adriana Vargas, who works at a beachside ice cream shop.

“When the tourists leave, everything closes.”

I asked Vargas what she does during the winter. “Nothing,” she replied. So perhaps the statistics are true?

I bought an ice cream and took a walk along the shore. It was a Saturday afternoon and the sun was shining. Crowds of tourists lounged under colourful umbrellas or splashed in the waves.

According to the town hall, 52% of the city’s population is foreign. Some 100,000 people live in the city permanently but several times that number come here in summer to enjoy their holiday homes.

Among them are Mike and Ann Bissett, retirees from Milton Keynes who permanently relocated to Torrevieja 12 years ago. They were drawn by the cheap properties, low cost of living and sea views.

“We could not afford this standard of living if we’d stayed in England,” Ann told me as we sipped cold drinks at a bar. 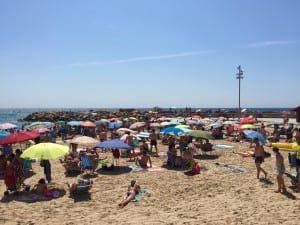 The Bissetts pay ‘a frightening amount’ in income tax on their pensions to the Spanish government. However, retirees who receive public-sector pensions pay taxes to their home countries, not to Spain, which distorts per-capita income calculations.

Plus, according to the Bissetts, some foreigners remain under the radar and avoid paying it at all, which can also affect the statistics.

Still, they can’t understand why Torrevieja is called the poorest city in Spain. Neither can Rodrigo Villarroel Perez, who runs a bar and restaurant near the Bissetts’ home.

“Maybe I live in a different reality,” Perez told me, shrugging. “My bar is full every night, all year long.”

Evidently, the end of summer may not mean the end of work for all Torrevieja’s residents.
Although listening to Perez talk about his success reminds me of Adriana Vargas, unemployed nine months out of the year.