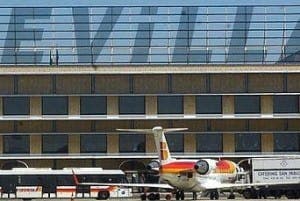 A WOMAN crash landed a small plane in Sevilla after the pilot lost consciousness.

The woman – who has no flight experience – suffered severe burns and remains in hospital, while the pilot – reportedly, her husband – died.

It is unknown if he died before or after the crash landing.

“He died, possibly before the accident, during the flight,” a spokesman said.

“The woman kept flying, even though she did not how to fly.

“The control tower guided her until landing it at the airport.”

A helicopter and a plane were sent to guide the plane, before it crash landed 3km short of the Sevilla runway.