JO Konta shocked Spain’s Garbine Muguruza with a record-breaking triumph at the US Open.

The three hours 23 minutes battle was the longest women’s match in US Open history in New York.

Konta said: “I didn’t think she [Muguruza] probably played her best today but credit to her, she’s an incredible fighter and no matter what level she brings, she always brings her top-10 mentality.

“I had to fight for every point, it wasn’t given to me, and I’m just happy to come back another day.”

This year’s beaten Wimbledon finalist Muguruza had been firm favourite to advance.

Tie-breaks were needed to decide the first two sets.

But in searingly hot conditions, Konta pounced on Muguruza’s forehand shortcomings in the third to take a 4-0 lead before seeing out the match. 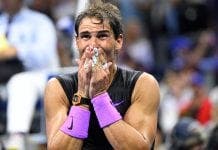 Spain’s Rafael Nadal wins US Open in five-set thriller to claim 19th slam title, one away from rival Roger Federer