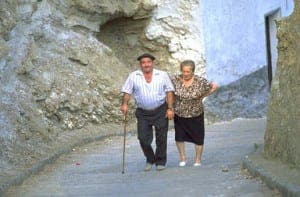 MAYBE it’s the Mediterranean lifestyle, or something in the water … or the wine … But the average Spaniard’s life expectancy has shot up by almost five years since 1990.

A 2013 study funded by the Bill and Melinda Gates Foundation reveals that the Spanish lifespan is approaching 82, up from 77 over the last two decades.

And you get more bang for buck here than in Britain where life expectancy  now stands at 81.5 years, up from 76 in 1990.

Even the guys are catching up. In Spain, although women still live longer than men, male life expectancy has risen at a greater rate – by 5.7 years compared to to 3. 8 years for females.

Spain sits in 13th position for longevity worldwide but if you really want to squeeze every last drop  out of life, go live in Andorra which leads the field with life expectancy averaging 83.9 years.