NEW Labour leader Jeremy Corbyn is fighting to retain a University of Madrid memorial to the International Brigade. British brigade members died at the university during the 1936 defence of Madrid in the Spanish Civil War. 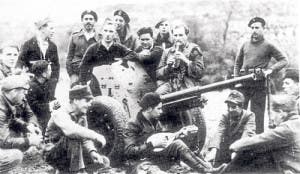 The veteran MP and activist, who swept to power in this month’s Labour leadership election, signed a 2013 Early Day Motion demanding the Spanish Supreme Court retain the memorial. Madrid’s regional high court ordered the memorial’s removal, claiming the university didn’t have planning permission. The university insists it applied twice to the PP-led city council, but received no reply. The memorial was erected in 2011 in the presence of four surviving Brigadistas, including British brigade member David Lomon. Around 4,000 British people  joined the International Brigade to fight Franco’s forces, with hundreds dying in Spain. Meanwhile, Corbyn’s victory in the Labour leadership election has been hailed by Spain’s left-wing parties. Podemos head Pablo Iglesias said: “At last we have an ally in the UK with whom we share a diagnosis of the current political crisis and a plan to fight for the defence of social rights through policies to tackle inequality”. PSOE general secretary Pedro Sanchez described Labour and the PSOE as “brother parties”. Corbyn has a long association with Spain’s left-wing struggles. His father wanted to join the International Brigade, but poor health scuppered the plan. The Islington North MP’s parents met on a 1930s march in support of the Spanish Republic. His second wife, Claudia Bracchitta, is Chilean, and her grandfather returned from his post as Spanish consul to Chile to fight for the Republic. The family were exiled from Spain following Franco’s victory in 1939.

Dilip Kuner - 5 Feb, 2023 @ 12:05
IT started as a Cold War tale of intrigue involving a spy, international headlines and appearances from Robert and Edward Kennedy. It ended when a...