I GET a firm grip of my bag, take a step back and make a break for it, except I don’t get far.

The next thing I know I’m slammed against a car door by three men and dragged helplessly across the road in a headlock, heart racing. They take my passport and my bag and throw it in the back of their black car.

But these weren’t any old road-side robbers, these were the men whose job it is to stop them; the Guardia Civil.

This unbelievable (but somehow true) episode began when I was dropped off on the outskirts of Estepona, at a roundabout off the A-7.

A ‘policeman’ approached and asked to see my identification, I said I live here but happened to have my passport on me so went to get it out.

But at that moment it dawned on me that this was just a normal man wearing a fluorescent jacket, and the car behind him just a normal black hatchback.

So to put my suspicions to bed, I withheld my passport momentarily and asked if he had ID. At which point he grew angry and lunged for the rucksack on my shoulders.

And there and then I made the decision to get myself to a more public place, a place where other cars would be around. I did what came naturally, and legged it. Except I didn’t bank on two other men diving out of the car and straight for me.

The next thing I know I’m slammed against the side of a car and head-locked forcefully. This is it I think, shouting for help and wrestling with my attackers…

As it later transpired – after some heated discussions – these actually were policeman, keeping an eye out for anyone trying to dodge the road block just out of sight.

As it also transpired, I was not a drug-laden fugitive.

My bag contained only my passport, camera and a brand new pair of orange swim shorts. Things which I am not willing to hand over to just any old person who approaches me with a fluorescent jacket on! 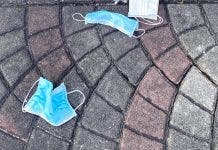 Dimitris Kouimtsidis - 31 May, 2020 @ 16:39
PEDRO Sanchez has reportedly secured enough support for a sixth and final extension to the state of emergency.