THEY stopped short of charging you to use the toilet. 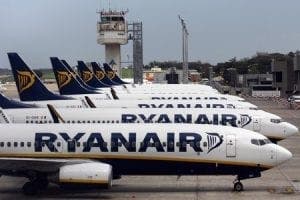 But budget airline Ryanair still makes a staggering 25% of its income from those added extras.

The company made a whopping €1.7 billion from baggage charges, booking fees and in-flight sales of food and beverages in 2014.

This is almost double the €745 million which came from extra fees in 2008.

Although seemingly high, low budget Hungarian airline Wizz Air and Jet2.com made an even higher proportion of their income on extras: 33.7% and 28.5% respectively.

On average, Ryanair makes €18.90 per traveller in extras while British Airways makes just €8.02.

Ryanair could be fined a whopping €72,000 for ‘ignoring’ the claims of three customers whose luggage was damaged