PRO-INDEPENDENCE Catalan parties have won a majority of seats in Sunday’s regional election.

• Scroll down for latest results…

Mas and his Convergence Democratique de Catalunya (CDC) followers want the election result to lead to a referendum on Catalan independence.

Mas said: “Catalans have voted yes for independence. Today we have a double victory.

“The yes vote has won and what”s more democracy has won.

“We will not let up. We have won with everything against us, and that gives us an enormous strength and a great legitimacy to take this project forward.”

The anti-independence Ciutadans were in second place with 25 seats.

An alliance between Junts pel Si and the CUP would give separatist parties an overall majority of seats, but with only 47.9% of overall votes cast.

The CUP have said they don’t want Mas to lead a pro-independent government, citing a police investigation into alleged kickbacks taken by Mas’s party the CDC.

Sunday’s election turnout was over 77%, a record, with four million of five and half million registered voters turning out.

Junts pel Si have said they would declare independence from Spain within 18 months of a vote for pro-independence parties at the election.

But this would put Catalunya’s nationalists on a collision course with Mariano Rajoy’s PP government.

Since coming to power in 2011, Rajoy has used Spain’s constitutional court to thwart Catalan separatist bids.

Spain’s constitution, put together in 1978 following the death of Franco in 1975, forbids regions from unilaterally voting on independence. 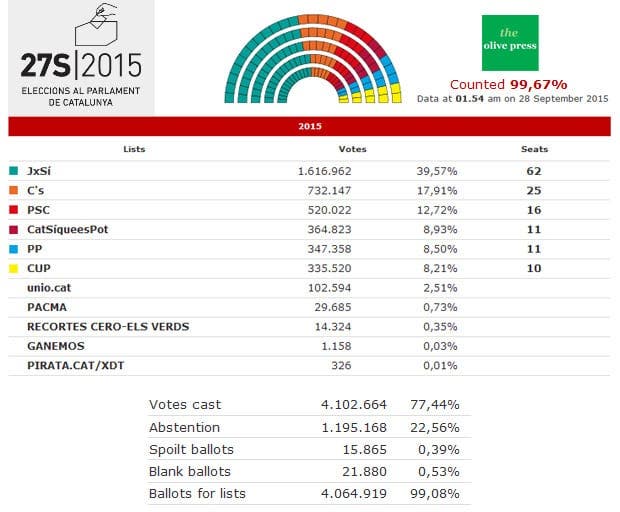