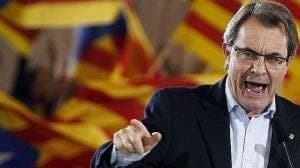 EXIT polls show Catalan pro-independence parties on course for a majority of seats in regional elections.

The anti-capitalist and pro-independence CUP stood to gain between 11 and 13 seats.

A coalition between Catalan president Artur Mas’s Junts pel Si alliance and the CUP would give secessionist parties an overall majority.

The CUP have previously cast doubt on Mas’s suitability to govern any breakaway government and of the need for separatist parties to command an overall majority of votes as well as seats.

But the polls put their combined projected share of the vote at slightly less than 50%.

Five and a half million Catalans went to the polls with stations closing at 8pm.

Huge queues were reported at polling booths in Barcelona and towns across the region.

Catalan government officials said 63.2% of eligible voters had cast their ballot by 6pm, a historically high turnout that is 6.9% greater than 2012’s corresponding figure.

Mas said: “Today there will be a plebiscite on the future of Catalunya.

“We overcome all the obstacles that the Spanish state put up … Democracy has won in Catalunya, Spain, Europe and the world.”

Mas’s coalition believes victory for separatist parties should lead to a referendum on independence from Spain.

Mariano Rajoy’s PP government has said any such move would be unconstitutional.

Nationalist parties hope that victory would set Catalunya on the path to independence.

Mas was met by a crowd of pro-union Partido Popular (PP) supporters waving Spanish flags as he went to cast his vote.