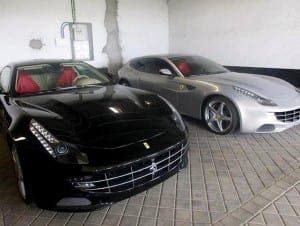 JUAN Carlos may have taken a back seat in the Spanish Royal family, but his sports cars are still riding in the fast lane.

The former king was given a gift of two Ferrari FF models, which he donated to the Spanish state following his 2014 abdication.

The Ferraris were a present from the prime minister of United Arab Emirates in 2011, although the king is not believed to have used them.

Prospective buyers have until October 30 to make a bid.

IN PICS: Concern for ‘Aunt Lilibet’ from the Spanish Royals, who have long had an ‘amazing’ relationship with Queen Elizabeth