A FIAT Uno covered in Francoist symbols for a political art project has been banned by Figueres town hall. 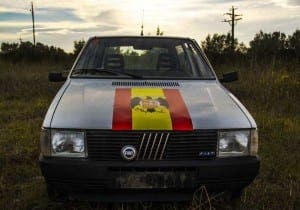 Nuria Guell and Levi Orta plastered a Nazi flag, a Falangist banner and an image of Spain’s late dictator Generalissimo Francisco Franco on the car.

They intended to drive the car around Figueres during this month’s festival of contemporary culture, Ingravid, to observe people’s reactions

But local authorities ruled that the provocative work, called Ideologies Oscil-latories, should be prohibited.

“We are surprised. We were hoping that no government that says it is democratic would censure a political work like this, especially in Catalonia,” a statement from Guell and Orta said.

“The saddest thing is it brings back ways we have overcome.

“Fascist symbols have gone the way of fossils, but not fascist attitudes.

“We believe that with different masks, fascist attitudes are still present in state institutions and in Spanish society.”

Guell has previously tackled such tough social subjects as immigration and unemployment in her political artwork.