HIS death marked the pivotal moment in modern Spanish history, releasing the country and its people from his 39-year dictatorship. 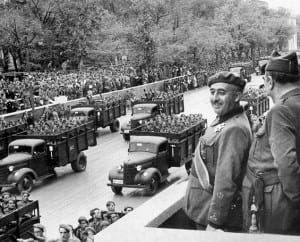 In the years that followed Francisco Franco’s passing on November 20 1975, Spanish society underwent an astonishing transformation from a cruel fascist dictatorship to one of the world’s most liberal democracies.

That evolution was powered by a rebirth of free thinking known as la movida which reached its zenith in Madrid.

To his supporters, El Caudillo (the Leader) was Spain’s saviour from godless left-wing ideology. To his detractors he was a brute presiding over a murderously vindictive regime.

Some 500,000 people died – not all of them on the field of battle – during the three-year Spanish Civil War, triggered when Franco led a military coup against the democratically-elected government in 1936. As many as  200,000 of those men and women were executed extra-judicially or on flimsy legal grounds.

A further 20-to-30,000 were put to death on El Generalisimo’s orders in the years after.

His final resting place, Valle de Los Caidos, is now the subject of legal wrangling. Families of Republicans killed during the Spanish Civil War are demanding their loved ones’ remains be removed from the vast mausoleum, where 33,000 bodies are buried. Republican prisoners were forced to help construct their hated enemy’s tomb.

The Pacto de Olvido (Pact of Forgetting) agreed by Spain’s political parties as the fledgling democracy took shape in 1977 was an attempt to draw a line under the war’s horrors and absolve the crimes of the regime. But a new generation of Spaniards is demanding answers.

Forty years on, the ghost of Franco and the atrocities he perpetrated still have the power to haunt.

Spain is not, yet, a Franco-free zone.