AS the theatrical saying puts it so succinctly, ‘Never work with children or animals’. It’s a motto that pretty much sums up the single male lifestyle philosophy that has carried me, more or less successfully, into my late 40s. 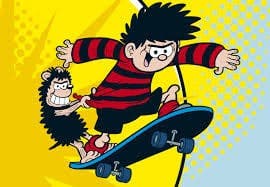 Admittedly I do have a cat, the infamous 50 Shades, but she wasn’t so much a lifestyle choice. She just rocked up at the Casita one day, had a look around and decided to stay, much to the local rodent population’s dismay. But apart from that, I have managed to resist the temptation to get any other pets.

The same goes for children. The only pitter patter of tiny feet that I hear around the Casita on a regular basis are either the aforementioned rodents in a desperate attempt to flee 50 Shades, or serve as a timely reminder that I really should clean up the kitchen as there are some seriously large ants making off with last Tuesday’s pasta.

(In common with most single males, there are some items that haven’t just formed cultures at the back of the fridge. They’re actually advanced civilizations with their own languages. Last year’s Christmas Stilton growls at me when the fridge light goes on).

Though I may not have children of my own, I am Godfather to two delightful girls – I play my Marlon Brando ‘el padrino’ role to great effect, and am unofficial Wicked Uncle to several others. I’ve also made it a point of principle to try and be nice to all kids, especially if their parents are strapping Scandinavians or Dutch. Not being the tallest person on the planet, by the time some boys reach their teens they tower over me, and I don’t want to be the victim of some savage revenge because I wouldn’t let them watch Peppa Pig when they were five.

Which leads me to my latest adventure. The Hottie Hippy was stuck without a babysitter for the weekend recently and had to attend an exhibition for her work. Judging by the WhatsApp messages I received from her, ‘work’ seemed to involve an awful lot of corporate dining.

Being the gallant chap I tend to imagine I am, I said that I’d, ahem, ‘bolster my reputation’ (and it needs all the bolstering it can get at the moment, trust me) by looking after her seven-year-old son for the night.

Said seven-year-old has a bit of a reputation for being what you might euphemistically call ‘a bit of a handful’ or ‘boisterous’. When I mentioned that I was looking after the child (whom I can’t name for legal reasons, so I’ll just call him Satanito) my social media was flooded with the type of valedictory messages not seen since those sent to men going on active duty to the Russian Front.

All went well at the beginning, with a male bonding session of hamburgers and driving games on the PlayStation.

I took Satanito down to the rugby club to watch England get thrashed by the Aussies and on my return, went through my usual ritual of getting out of the 4×4 to and walking around the front to unlock the main gate.

As I fumbled for my keys, I heard a small voice yell, ‘I’m going to kill you’ and looked up to see that Satanito had undone his safety belt, clambered onto the driver’s seat and was manically sawing away at the steering wheel.

The fact that my 4×4 is automatic, the engine was running and all he had to do was knock the gear stick down to flatten me meant that I let out a blood curdling cry as my life flashed before my eyes. (Though when you’ve had my Rock n Roll lifestyle, that bit was rather entertaining)

Satanito shot out of the driver’s seat into the back, and I reflected that I really should work with safer animals. Like Great White Sharks…