A THIRD Weetabix is a must if you’re planning to cycle to Ronda from base camp San Pedro de Alcantara. 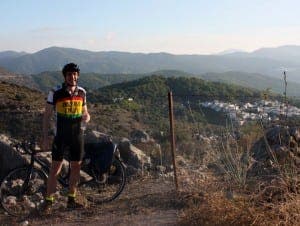 The 48 km ascent to this mountain eyrie is a tour de force on a Tour de France scale but ‘vale la pena’, as they say here in Spain.

And with my cyclist’s antennae twitching over tales of Roman amphitheatres, gorge dwellings and underground cave systems hidden around Ronda, I wasn’t going to sit and spin the wheels on my 18-gear Rocinante.

Those embarking on the climb are offered spectacular views. Pedal past Los Arqueros Golf Club’s gilded gates and El Madronal, home to the rich and famous. To your right, La Concha’s awe-inspiring peak points the way.

The A374 twists past thick green canopies of fir trees carpeting the landscape below. Passing the exclusive La Zagaleta Country Club, distant mountain ranges fold into one another.

A ‘Welcome to the Serrania de Ronda’ sign greets me 22km up, as do warning signs for snow. I push on through and take a detour to Parauta, one of Andalucia’s famed white villages, guarding the gateway to the majestic Sierra de las Nieves.

A thin ribbon of road leads to this tiny village in the valley, built around the 16th century Iglesia de la Inmaculada Concepcion, cobbled streets and steaming chestnut braziers adding to its charms.

It’s a sharp climb back to the main road, but this is the home straight. The fading sunlight deepens the landscape’s burnt ochres and vivid emeralds as I power on to Ronda, serenaded by the gentle toll of cow bells.

Ronda’s old town bustles with Friday evening revellers, but I can’t linger for too long over El Tajo’s swooping splendour. I’m meeting a man who knows a thing or two about cycling.

Jesus Rosado is a born-and-bred Ronda cycling legend who battled his way to Paris in the 1990 Tour de France after honing his skills in his hilly homeland. He opened his bike shop on Plaza del Ahorro 22 years ago but he loves to recall the glory days.

“It was like a dream. I was 23 years old; a year before I was cycling in competitions, and suddenly I was cycling in the Tour de France with my idols; Miguel Indurain, Greg LeMond. It was an incredible experience,” he says.

Not even the angels are stirring as I leave heavenly Ronda next day at first light. I cycle towards Arriate, the countryside’s gold and green parading its Saturday morning best.

Arriate’s emigrant monument recalls leaner times, but the town, which has grown in recent years to 4,000 residents,  is now home to quality shops.

Its train station, built on one of Europe’s steepest track gradients, is part of Mr Henderson’s Railway, the 1890 brainchild of British engineer John Morrison and financier Sir Alexander Henderson.

It’s a punchy climb from here to Setenil de las Bodegas, burrowed into a gorge carved out by the River Trejo, its towns and houses embedded into the rock like Hobbit homes.

After refuelling with café con leche and a thick slab of pan con tomate on Calle de las Cuevas, the sinuous climb out of Setenil gives way to a flat road lined with olive trees leading to the Roman ruins of Acinipo.

From here, black asphalt, untroubled by the rumble of cars, cuts through golden sunflower fields as craggy mountain peaks serrate the horizon. It’s a stunning section of the ride.

Disaster strikes as my lower gears malfunction. But help is close to hand and the three bells of the Iglesia de la Virgen de la Carmen ring me into Montecorto, where the 450 inhabitants are also gearing up for their first Independence Day celebrations.

Bougainvillea climbs whitewashed walls and a fresh mountain spring meanders through the village. A khaki-fatigued hunter, rifle slung over shoulder, strides past.

Also here to greet me is Claire Higgins, who has run Andalucian Cycling Experience with her husband Ashley for 10 years. The company organise cycling holidays and accommodation around Ronda. Not only has Ashley mapped my route but Claire attends to my bike’s gear issues (finding a mechanic is like divining water in a desert to the stranded cyclist).

“We fell in love with Ronda,” says Claire. “It’s got good mountain-biking, there are flat rides for families and some really big climbs for those who want to test themselves.”

As I say goodbye, the clouds burst (October and November are Ronda’s wettest months). I seek sanctuary in a nearby restaurant before braving the elements and the steep climb towards southern Europe’s oldest subterranean cave system, the spectacular Cueva del Gato. Its waterfall and natural pool make a refreshing stop for the summer cyclist.

And it’s not all downhill from here. If you’re feeling a little saddle sore, head to Benaojan-Montejaque station where a train will speed you and your bike back to Ronda for a well-earned beer.