THE high-rise of tomorrow has been unveiled. 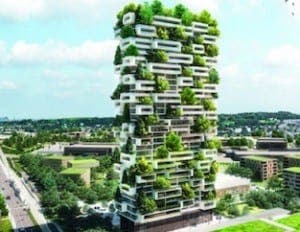 In an attempt to rejuvenate the reputation of high-rise tower blocks, an Italian architect has created a greener ‘forested’ version of the concrete jungles that shot up across Europe in the 1960s.

The first one will be erected in Switzerland in 2016, with building firms in Spain and the UK said to be in negotiations with architect Stefano Boeri.

With 195 residential units over 29 floors, the tower block also contains oak, maple and cedar trees integrated into the building.

Described by Boeri as a ‘vertical forest’, the architect claims the building will ‘revolutionise’ the property industry.

“The building is a living symbol of a new relationship between the urban sphere and the natural sphere,” Boeri said.

Gibraltar, too, is contributing to the greener architectural landscape with Ocean Spa Plaza. Inspired by Singapore’s Tree House, the world’s largest vertical garden, it will support a living wall of oxygen-emitting, carbon dioxide-absorbing foliage to provide a natural habitat for birds and other wildlife, topped off with swift nesting boxes on the roof.

But if you’re after a pied-à-terre in this luxury block of 125 apartments and penthouses at Ocean Village, they’ll only be for rent now. They all sold out with 36 hours of their release.