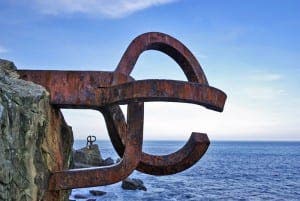 ONE of Spain’s most revered sculptors is having his work showcased in New York City.

Eduardo Chillida’s massive metal monuments include the dramatic Combs of the Wind, which is embedded into rocks in his native San Sebastian.

A Madison Avenue pop-up gallery is hosting until December the first US collection of Chillida’s work in 26 years, with rarely seen examples of his work lent by his estate.

London dealer Pilar Ordovas revealed it took a month to ship Chillida’s sculptures to New York as some of them weigh up to 21 tonnes.