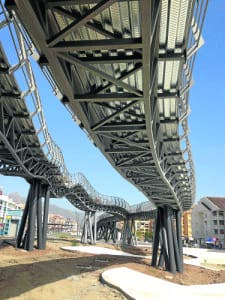 SAN Pedro’s iconic footbridge has walked its way into controversy.

The stunning overpass has been denounced by political party Costa del Sol Si Puede over claims of embezzlement and funding irregularities.

The Podemos breakaway group claims the former PP-run Marbella town hall put the same €309,000 payment through the books twice as a way of embezzling public funds.

The denuncia claims that demolition payments for a playground were put through twice among other irregularities.

The party is now demanding the new Marbella mayor discloses all payments in connection to the San Pedro project.