SAN Telmo has often being described as a town within a city. It is one of Jerez’s most infamous Barrios, absorbed by the city as it expanded. 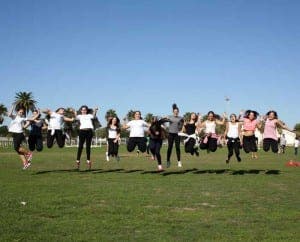 With the highest unemployment rate in Jerez and situated in a natural dip in the ground, which locals generously call “the hole”, San Telmo has remained apart. The existence of identity 11408 for the area is clear proof. A quick visit will expose you to its name spattered across walls in black paint, and cafes overflowing with locals and locals only.

“When I told people that I work there, they told me that it is an awful area. The kids are very bad” commented a foreigner working at the local school.

The dire situation has led to the township becoming sealed off. Inhabitants rarely consider leaving it, and few visit.

Yet somehow, Gaelic football found its way into the Barrio.

The local school took the decision to adopt the sport to combat the entrenched sexism, and introduce its pupils to a foreign culture.

“We wanted to remove social and gender divides, as well as introduce pupils to a culture outside San Telmo”, stated the project organiser.

Gaelic football was settled on as the ideal engine to implement the change. As an unknown pastime, it does not come with the social stigmas of other sports. The school claimed that this could help establish equality of the sexes.

They placed both girls and boys on the same teams to encourage equality, and tasked pupils to develop fantastic posters about the sport. As a result, the schools inner-building is now heavily decorated with reminders of Gaelic football. A lot of energy has been invested to really establish it as its own sport.

The games foreign nature immediately forced pupils to turn their eyes over the border. Developing this awareness is key to encouraging children to formulate aspirations for the future, and encourage tolerance of other cultures.

“We have a child here who wants to study medicine now”, commented the organiser with a beaming face.

As well as playing the sport at break times, the kids have also been involved in matches. They have played against the Cadiz Gaelic football team.

“In the future we hope to contact clubs in Ireland and begin a cultural exchange”, said the organiser.

It is fantastic to see how our own Irish culture can be utilised to promote equality and tolerance. Perhaps we will see flamenco in Irish and UK schools very soon.