FROM the traditional pantile roofs to timeless cobbled courtyards, at least one local architect has dedicated his life to protecting the Andalucian vernacular. 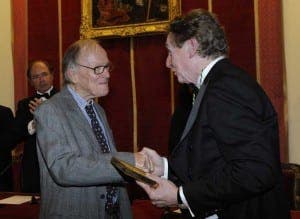 One of the region’s longest-serving expats Gray has, fittingly, now been recognised for his remarkable catalogue of sensitive designs.

Everything that the typical Costa del Sol monstrosities are not, his buildings have recently earned him a prize, the Rafael Manzano Martos prize, that is awarded for honouring traditional Andalucian architecture styles.

And it is no surprise. For Australian Gray, 80, counts among his fans both actress Brigitte Bardot and world respected writer Gerald Brenan, for whom he designed a home.

His devotion to Andalucian architecture was sparked when he embarked on a love affair with Spain 57 years ago.

“I arrived in Spain about a year before Castro rode into La Havana,” he reveals.

It was 1958 and he initially settled in Valladolid, where he got a job as an English teacher. But he soon got the travel bug to adventure further afield.

“I was young and spent a lot of time travelling around,” he tells me. “I was teaching English wherever I went, including in Madrid and later in Torremolinos and Malaga.

“I did that for a year or two then went back to England. After that I went to Copenhagen to teach English then settled in Almunecar.”

Intriguingly, the one-time English teacher didn’t learn his craft for designing buildings at college, at all. Instead, he learned directly by studying traditional styles and drawing lessons from the craftsmen who kept these styles alive.

“I put as many years into studying as I would have at university. The type of architecture I’m interested in they don’t teach at university,” Gray told the Olive Press. “Modern art is gimmickry, and gimmickry doesn’t make good art.”

His first forays in design came when he settled in Almunecar.

“There was something about the style of the old buildings there that I fell in love with back… it was a beautiful town to walk around and the architecture really got to me.”

Gray’s CV now includes buildings all around the region.

As well as the town hall of Pitres, in Granada, he designed the urbanisations of Pueblo Lopez, in Fuengirola and the celebrated La Virginia urbanisation, in Marbella.

All of his designs are gleaming white jewels and unmistakably Andalucian.

Gray’s loyalty to local heritage, and his enduring interest in the beauty of domestic dwellings, are certainly a counterpoint to famous modern architect Frank Gehry’s otherworldly inventions, including the Guggenheim, in Bilbao.

“Brigitte Bardot stayed there. She said it was the most agreeable hotel she had stayed in,” says Gray.

Gray’s early years in Spain also drew him into contact with Brenan, the British writer and Hispanophile, whose books including South from Granada, transmit the very essence of Andalucia.

“I met him very early on when he was living in Churriana,” says Gray. “It turned out he wanted to leave his house in Churriana where he lived from before the Civil War. He wanted to forget about it all so I ended up designing a house for him in nearby Alhaurin El Grande.

“I first met him not long after I moved to the Alpujarras region, where he lived for a long time. I used to see a lot of him. He was extremely interesting, an elegant conversationalist.”

Gray still lives in Las Alpujarras, in a tiny village called Atalbeitar embedded in the Andalucian hills where he says he feels more Spanish than Australian or British.

In a long career that has taken him around the whole region, he in particular loved Marbella and Torremolinos.

“I love Andalucian architecture because it is so pleasing,” he says.

“It’s lovely to walk down a street designed in the old Andalucian style. Marbella used to be like that. Torremolinos used to be one of the most beautiful places in the world.”

But his heart was broken when he saw the beloved unspoilt coastline of Andalucia slowly get eaten up by development.

As the collar of concrete expanded ever wider, his style of architecture got increasingly lost.

“You can see on Costa del Sol there are massive amounts of architecture and most of it is very depressing,” he says.

“It used to be extremely beautiful – one of the most beautiful places in the world. Now it’s one of the ugliest. It doesn’t say much for modern architecture.”

However, he did not give up hope…. and landed a job as artistic director of a restoration school in Lebrija between 1986 and 1989.

The school taught young people to restore local monuments and churches and produced some of Andalucia’s finest artisan craftsmen.

“I thought that would be a way of teaching people what was being lost with the old Spanish crafts, things that had been completely destroyed. Ceramics, ironworks, carpentry,” says Gray.

Remarkably Gray is still working today, in particularly on a couple of houses in Las Alpujarras.

“I will continue to design and renovate houses as long as I can. People no longer want to build urbanisations so I am doing what I know best and protecting what little is left.”