MANY fill their time in Andalucia through treks across the sierras, or gawping at the Moorish and Christian monuments. Few consider retracing their ancient roots, and reconnecting with a lost skill. 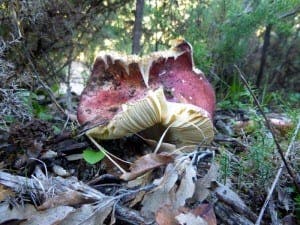 Just after the crisp autumn rains, the forest floors of Andalucia explode into a forest of fungi. Considering that Andalucia has 81 natural spaces, comprising 21% of the region’s total territory, this is a resource that certainly doesn’t go unnoticed.

Local people have been venturing out to gather mushrooms here since before Christ. Neanderthals too, knew the value of this resource. They used to supplement their diet with the mycological nutrients.

I took a chance to learn more about my past, when I visited Grazalema. Travelling with two local mushroom experts, we made our way up the winding roads snaking away from Jerez into the countryside. The walk began with a jump over an old fence, onto a well used footpath.

“It has just rained. Now the mushrooms will be out”, commented one of the experts. 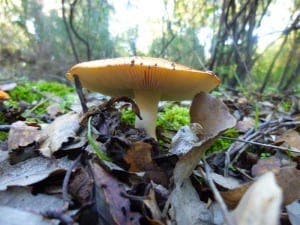 And indeed they were. Within around five minutes of searching, we stumbled across our first whopper mushroom. I could hardly believe my eyes. It was enormous with a browny fleshy colour, poking out from the leaf litter.

Mushrooms are harvested by cutting them at the base with a shark knife. This way, the underground root system is not damaged, meaning that in time a new mushroom will sprout.

To go with experts is essential. Some mushrooms are toxic, and telling them apart is often tricky. Mushrooms, or setas in Spanish, are one of Spain’s most major killers.

“Two people have already died this year in Zaragoza because of a toxic mushroom.” 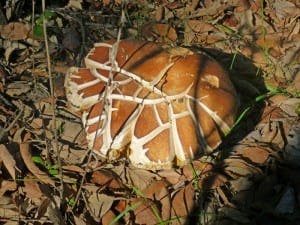 The Junta de Andalucia has stepped in to try and prevent this, by publishing a ‘mushroom guide.’ You can find the booklet here – click link.

From Jerez, it is possible to travel with guides using Alpina Education and Free Time. They run occassional tours up into the Sierra de Grazalema to track down the legendary setas. Their facebook link is found here – Alpina Education and Free Time. It cannot be underestimated how important it is to travel with a guide if you plan to go mushroom picking.

The unstoppable tide of popularity has recently forced Almeria to impose a ban on collecting more than 5 kg per person. Certainly a sign of a magical and memorable activity.
Although an exciting and unmissable activity, it is not without its dangers. Generations of knowledge built up among ancient man, have been lost through urbanisation. It is only through this unique activity offered by Andalucia that you can begin to reconnect with this by-gone age. In rediscovering a love for picking mushrooms, you will uncover a love of mushrooms previously lost in the waves of the modern world.

Alex Trelinski - 26 May, 2022 @ 18:30
FIVE tons of hashish was intercepted by the Guardia Civil after officers stumbled upon a boat unloading the consignment at a Murcia cove. Four traffickers...