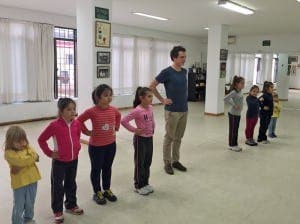 I’M poised nervously between two rows of little girls while Andalucia’s Queen of Flamenco selects the music for my first dance.

They say it takes two to tango but, even though my teacher is a famous professional, it’s going to be a tough call.

All of a sudden I am shocked into action: “Put your hands on your hips or get out!” raps Chari Expresati and she means it.

She has, after all, just led her flamenco starlets to victory in Andalucia’s ‘Vive tu Sueño’ semifinal in Almeria. Next stop Madrid for the National Championships in March!

Before that, she has the tough task of taking a team to the International Theatre Festival of the Mediterranean in Tetouan (Morocco).

And before even that, she has the gargantuan task of teaching me how to strut my stuff without coming a cropper.

Luckily, Chari has years of experience turning duck-footed novices into swans. She twists and turns and prances and pirouettes while I desperately try to keep up. But she never stops smiling and keeping an eye on my progress.

Although as soon as I’m successfully following her feet, my arms get lost, and vice versa … a no-win situation.

On first evidence, I’m not going to make it into her team for Madrid, and not just because it’s an all-female group of 10- and 11-year-old dancers.

But I doubt they’d need me anyway. Chari has been dancing since she was four years old and she’s 66 now. That’s 62 years spent honing her passion and 40 passing it on. Next year it’s also the 30th anniversary of Chari’s school at the Universidad Popular de San Roque.

“I love flamenco and it’s been my whole life’s passion,” she says. “But passing that passion on to the youngsters is very rewarding.”

“I have taken groups to so many places, including Japan, England, Holland and Morocco.

“I have taught foreign children here too, and it is popular with Americans and Italians in particular.”

The four corners of the dance hall are testament to her success, adorned with numerous trophies vying for the most prominent positions.

In fact, a mother of two girls in the dance tells me Chari is something of a ‘San Roque celebrity’.

Her feisty feats with footwork have certainly helped put this tiny town in the Campo de Gibraltar on the map.

So there’s one more question I have to ask before we finish our session and I let her get back to work… How did I do?

I think she meant it …