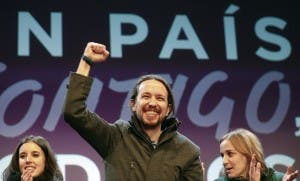 The success of emergent parties Ciudadanos and Podemos signals that Spaniards are sick of the cronyism and corruption that has marred their political system for decades.

Spain’s original ‘Transicion’ came after 1975 when the country returned to democracy following a 40-year dictatorship.

After Sunday’s explosive results, the compromise shown by those political leaders 40 years ago needs to be summoned by the leaders of this ‘new transition’.