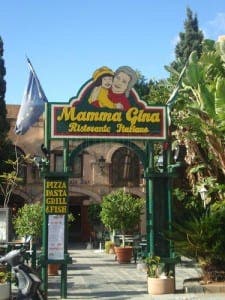 A POPULAR Marbella eatery was over-run by Guardia Civil officers from the Tax Agency at 8.30am this morning.

Mama Gina on Avenida Jose Melia has been temporary closed and ‘placed under lock and key’ until officers’ investigations in connection with alleged money laundering are complete.

Around 12 officers were investigating across several buildings owned by Marbella’s La Pesquera Group.

Police are carrying out a rigorous inspection of the stores, offices, the two terraces and the restaurant premises.

British expat David Rowe, 47, found the threshold blocked when he went to Mama Gina’s this morning for a coffee.

“Mama Gina’s is a regular haunt of mine but when I arrived this morning police informed me I would not be entering and it would not be open for at least five hours,” he told the Olive Press.

“There were Guardia Civil, Nacional and Local police all over the place and I thought something must be up, but they wouldn’t disclose anything.”

The operation is reported to continue across several other premises and private houses.

The Olive Press is continually trying to contact Mama Gina’s to find out more.