SPAIN has lost one of the 20th century’s most valuable historical archives to the USA.

The haul of more than 2,700 items includes letters, telegrams and photographs from leaders such as Hitler, Stalin, Churchill, Franco and De Gaulle.

The Jose Maria Castane Foundation is handing more than 60% of its collection to Harvard University following the Spanish government’s refusal to take charge of the collection,

Documents to be sent offer fascinating insight into Russia’s tsars, the holocaust, the atomic bomb and the Normandy landings.

“The legacy will have a significant impact on the development of our collection,” said Leslie A. Morris, head of Harvard’s Haughton Library.

The Castane Foundation was set up 20 years ago in Madrid by entrepreneur Jose María Castane to collect and protect documents relating to 20th century conflicts.

“The only thing we wanted was for the collection to remain in the hands of a first-rate institution that guarantees their conservation in the best condition without any financial compensation,” said Castane. 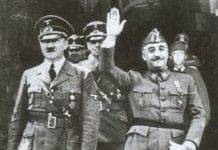 Last of the frogmen