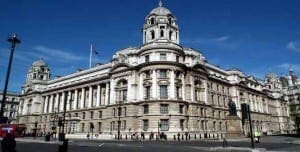 WINSTON Churchill’s World War II headquarters is to be given a makeover by a Spanish construction company.

The keys to the Old War Office in London have been handed over to partners at Spain-based firm OHL and global conglomerate the Hinduja Group.

With 1,100 rooms across seven floors, the building will be converted into a five-star hotel.

Located on Whitehall, the building is just a stone’s throw from British Parliament and the Prime Minister’s residents on Downing Street.

With 580,000 sq feet and more than three kilometres of corridors, OHL in partnership with the Hinduja Group has purchased the lease – for an undisclosed fee – from the British Ministry of Defence on a 250-year arrangement.